We are Playing Fantasy Battles – The 9th Age: All games are to be open list. Please provide your opponent with a copy of your list prior to each game.

Lists Due: All lists are due 8-30-19 and must be in a printed or typed format. We prefer lists to be made in Army Builder or Battle Scribe programs.

Grudge Matches: We highly encourage Grudge Matches. Both players need to agree to the grudge and let us know at least 7 days before the tournament starts.

Point Limit: All armies have a point limit max of 4500, and all of the official armies are allowed (so no homebrew armies. I know the Oceanborn book looked great, but this is not the place for it). You can find and download all of the rules and army books here The 9th Age

Magic Paths: You must indicate which path each wizard will be using for the entire tournament during the weekend on your army list. The “Essence of a Free Mind” item is the exception: you must provide both paths you intend to choose from on your army list.

Current Version of Rules, Magic Paths and Army Books: We plan to use the 2.0 of the rules set. We will use the latest 9th Age rule set and army books as released by 8-15-19.

Scenarios & Maps: The scenarios are out of the rule book. Download the Scenarios and Map Pack.

Rules, Disputes & Cheating: Players are required to have the rules handy including their specific army book (either printed or in digital form) and resolve rule disputes between themselves in a civilized fashion. Should there be any issues, we will have Rule Judges available. Any decision made by the Rule Judge will be final in an effort to keep the games moving.

If a player is caught soft cheating like giving wrong stats on models or casting spells on a lower casting value than the minimum, that may result in a 1-3 point penalty per time caught.

If a player is caught hard cheating like using an item they do not have on their list, casting spells they do not have, moving models out of turn or adding dice to a roll while ther opponent is not looking that will be a 5 point penalty for the first time and an auto 0-20 for the final score if caught again on same game.

Call a judge right away for any issues with cheating and the judges will be a fair as possible when considering all cheating allegations bur remember cheating must be proven to have a penalty accessed. Let’s all play to have fun and avoid any instance that could be considered cheating.

We are Playing by WYSIWYG Rules: In general, the models in your army should be easily identifiable as the unit they represent. It is especially important that any models you are using could not easily be mistaken as another unit in your army (so no using skeletons as zombies in your Vampire Covenant army, for example).

Painting Requirements: Table top 3 color standard painting is highly encouraged but not required. Players can not win the Overall Champion award without a fully painted and based army.

Game Victory Scoring: All scoring will be done according to the guidelines in the 9th Age Rulebook.

Required Equipment for All Players: All players must have the following equipment in order to play. We will not be providing any of this equipment.

While not necessary, the printable magic cards available on The 9th Age can help you organize your magic phase and limit confusion throughout the tournament. We highly recommend that you bring copy of the cards or another printed version for each path you intend to use.

Sylvan Elves players need to bring their own forest. They should be no larger than 27 cm by 19 cm or for us non-metric system Americans 10.5 in by 7.5 in.

Awards! We will be Recognizing the Outstanding Players in the Following Categories:

*Only categories someone can win more than 1 are Player’s Choice, Most Feared List and Traveled the Farthest.

**In the event of a tie breaker, if the tied players played a game the total battle points from their game will be used to determine a winner. If further tie breaking is needed then it will go to overall battle points and finally sportsmanship scores.

Best Appearance: As decided by our painting judge. Paint score are calculated using this Painting Rubric 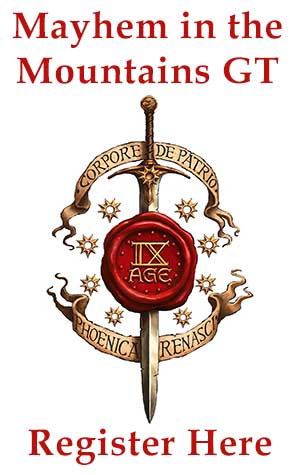